Leading is one important function of management only next to planning and organizing. It is the liveliest element in the management process. It initiates actions to translate the decisions into concrete actions. Managers have to lead their subordinates through guiding and motivating. Leading involves directing, influencing and motivating employees to perform essential tasks. 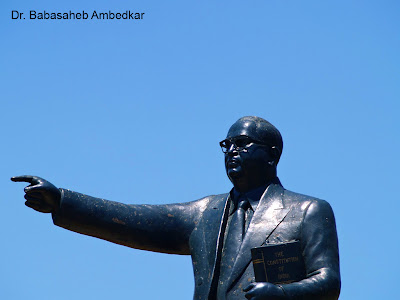 Every manager has to act as a leader in his area of operation. This means he has to guide, instruct, lead and motivate his subordinates so as to use their skills, efficiency, capacity etc. for the benefit of his Organisation. He has to influence the behavior of his subordinates and get the work done through their collective efforts. Leadership qualities are required in order to conduct various managerial functions effectively. Each and every group of people engaged in a particular activity needs a leader in order to guide, co-ordinate and control their efforts. In this sense, leadership is required for the conduct of economic, social, political or cultural activities. A college principal, secretary of a co-operative society or of a sports club or cultural association act as leaders in their respective fields. George Washington, Abraham Lincoln, Winston Churchill, Dr. Babasaheb Ambedkar, Mahatma Gandhi, Nelson Mandella, John F. Kennedy are world known political leaders while Henry Ford, J. R. D. Tata and S. L. Kirloskar are known leaders in the business world. Here, we are concerned only with the managerial leadership. Managerial leadership is that part of a manager's activities by which he influences the behavior of his subordinates towards a desired objectives or results.

Leadership is followership. A good leader leads but does not push. Effective leadership can guide a group towards certain ideals without exerting much force. Managers who possess the quality of guiding and directing the subordinates under inspired impulses can be called business leaders. Leadership is concerned with getting results through people and implies the Organisation of staff into productive teams, groups and departments. Leadership entrails the creation of human structures, their motivation and direction; the resolution of conflicts at the workplace, creating vision for the entire business and providing resources in support of this.

Manager can perform various managerial functions more effectively by providing proper leadership to his subordinates. This makes leadership an inevitable aspect of management process itself. Leadership is essential for the success and stability of a business enterprise. Managers possessing leadership qualities are called business leaders.

A leader needs sound health and physical capacity to perform his functions or duties assigned in an efficient manner. In addition to physical qualities, an ideal leader needs certain qualities of head and heart. The main qualities include Personal Traits and Managerial Traits which are shown in the following chart: 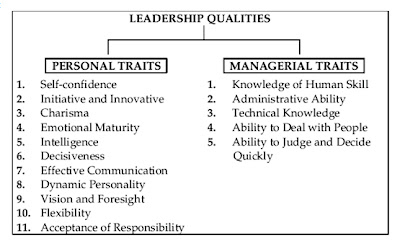 There are different styles of leadership. This classification is based on the methods used by the leaders.

Edwin Flippo has defined leadership style as "a pattern of behavior designed to integrate organizational and personal interest in pursuit of some objectives."

The traits approach theory was one of the first attempts to explain the leadership based on personal traits. Traits are inborn or acquired personal qualities of an individual. They include physical qualities and the qualities of head and heart.

Traits theory refers to certain traits/characteristics which separate leaders from non-leaders. Such traits enable some to rise above their followers.

The basic traits useful for leadership include height, energy, looks, knowledge and intelligence, imagination, self-confidence, integrity, fluency of speech, mental balance, enthusiasm, courage, sociability, and friendliness and so on.

According to the traits theory, an individual possessing such traits is usually able to influence others and gets the status of a leader. This suggests that a leader is quite different from an average person in regard to personal qualities such as intelligence, perseverance and overall personality including physical features.

The traits theory suggests that leaders are above the followers in regard to personal traits. A fair combination of such traits makes them influential and impressive as compared to others.

Traits theory indirectly supports the view that leaders are born and not made. Researchers have suggested different traits of leaders. Such traits are similar to physical, psychological, mental, intellectual and other qualities which are normally treated as essential in the case of an ideal leader. It may be noted that some traits are innate while some others can be acquired through special efforts.

Leadership grows/develops not by traits but by the acts or experience of a person. The behavioral theory is based on the assumption that leaders are not born but they develop gradually by experience and maturity. The attention is given to what leaders do (i.e., their behavior) rather than to what they are. A leader learns new traits through his experience (behavior or acts). The focus point, here, is on what the leader does while leading.

This behavioral theory suggests that a leader do not behave in the same manner under all situations. Similarly, his actions are not identical under all situations which he faces. He adjusts his behavior as per the need of the situation. There is an element of flexibility in his approach and behavior. He studies the situation and adjust his leadership style accordingly. He adopts different leadership styles to meet the need of different situations.

The most popular behavioral theories are:


The behavioral approach theory is practical in nature. It gives more attention to acts and behavior of a person and not to the personal traits. Leadership develops by experience and not by inborn traits. A leader has to acquire certain qualities by experience only.

Situational leadership style is flexible/adjustable and is normally more effective as compared to other types of leadership. The situational theory of leadership was developed by Hersey and Blanchrd at the Centre for Leadership Studies in Ohio State University.