The main objective of every insurance contract is to give financial security and protection to the insured from any future uncertainties. Insured must never ever try to misuse this safe financial cover.

Seeking profit opportunities by reporting false occurrences violates the terms and conditions of an insurance contract. This breaks trust, results in breaching of a contract and invites legal penalties. 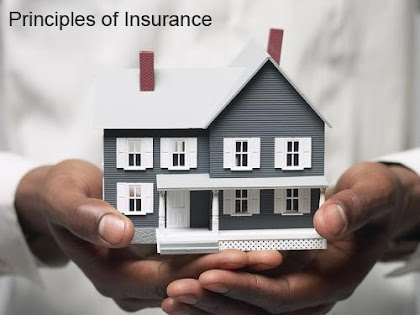 An insurer must always investigate any doubtable insurance claims. It is also a duty of the insurer to accept and approve all genuine insurance claims made, as early as possible without any further delays and annoying hindrances.

Seven Principles of Insurance With Examples

The seven principles of insurance are :- 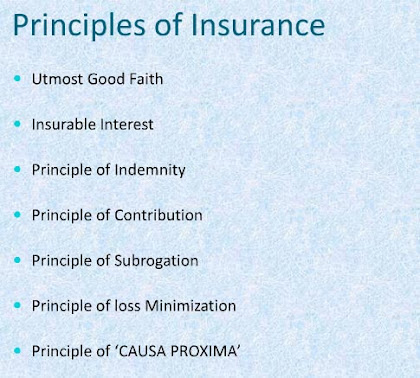 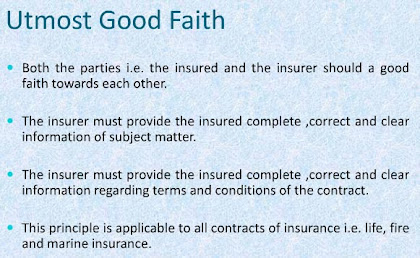 Principle of Uberrimae fidei (a Latin phrase), or in simple english words, the Principle of Utmost Good Faith, is a very basic and first primary principle of insurance. According to this principle, the insurance contract must be signed by both parties (i.e insurer and insured) in an absolute good faith or belief or trust.

The person getting insured must willingly disclose and surrender to the insurer his complete true information regarding the subject matter of insurance. The insurer's liability gets void (i.e legally revoked or cancelled) if any facts, about the subject matter of insurance are either omitted, hidden, falsified or presented in a wrong manner by the insured.

The principle of Uberrimae fidei applies to all types of insurance contracts. 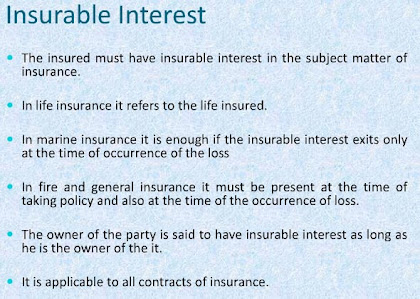 Indemnity means security, protection and compensation given against damage, loss or injury.

According to the principle of indemnity, an insurance contract is signed only for getting protection against unpredicted financial losses arising due to future uncertainties. Insurance contract is not made for making profit else its sole purpose is to give compensation in case of any damage or loss.

However, in case of life insurance, the principle of indemnity does not apply because the value of human life cannot be measured in terms of money.

Principle of Contribution is a corollary of the principle of indemnity. It applies to all contracts of indemnity, if the insured has taken out more than one policy on the same subject matter. According to this principle, the insured can claim the compensation only to the extent of actual loss either from all insurers or from any one insurer. If one insurer pays full compensation then that insurer can claim proportionate claim from the other insurers.

Subrogation means substituting one creditor for another.

According to the principle of subrogation, when the insured is compensated for the losses due to damage to his insured property, then the ownership right of such property shifts to the insurer.

This principle is applicable only when the damaged property has any value after the event causing the damage. The insurer can benefit out of subrogation rights only to the extent of the amount he has paid to the insured as compensation.

For example :- Assume, Mr. John's house is set on fire due to an electric short-circuit. In this tragic scenario, Mr. John must try his level best to stop fire by all possible means, like first calling nearest fire department office, asking neighbours for emergency fire extinguishers, etc. He must not remain inactive and watch his house burning hoping, "Why should I worry? I've insured my house."

7. Principle of Causa Proxima (Nearest Cause) 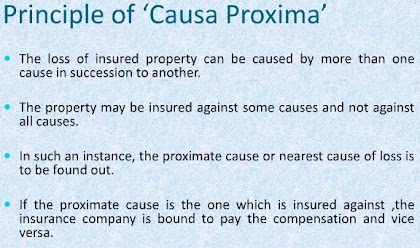 Principle of Causa Proxima (a Latin phrase), or in simple english words, the Principle of Proximate (i.e Nearest) Cause, means when a loss is caused by more than one causes, the proximate or the nearest or the closest cause should be taken into consideration to decide the liability of the insurer.

The principle states that to find out whether the insurer is liable for the loss or not, the proximate (closest) and not the remote (farest) must be looked into.

For example :- A cargo ship's base was punctured due to rats and so sea water entered and cargo was damaged. Here there are two causes for the damage of the cargo ship - (i) The cargo ship getting punctured beacuse of rats, and (ii) The sea water entering ship through puncture. The risk of sea water is insured but the first cause is not. The nearest cause of damage is sea water which is insured and therefore the insurer must pay the compensation.

However, in case of life insurance, the principle of Causa Proxima does not apply. Whatever may be the reason of death (whether a natural death or an unnatural death) the insurer is liable to pay the amount of insurance.