The advantage or superiority of Ohlin's Modern Theory over the Ricardian Classical Theory of international trade gets highlighted from the following important points of comparison. 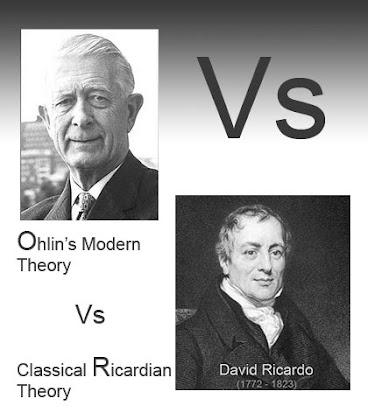 1. No difference among internal and international trade

But according to Ohlin, there is no need for a separate theory of international trade, as fundamental principle of both is same.

According to the classical theory, the principle of comparative costs is a special feature of international trade.

According to Ohlin, the principle of comparative cost is applicable to all trade; whether internal or international.

5. Supply of factors of production considered

Ricardian theory which no doubt explains the reason for internal trade is more concerned with the benefits of trade. For classical economists, the welfare aspect of trade is more important. Ohlin has adapted a positive approach in explaining the cause of international trade. His main concern was to find out the cause of trade and not so much of its welfare aspect. Therefore, it is pointed out that Ohlin's analysis has contributed to positive economic analysis. 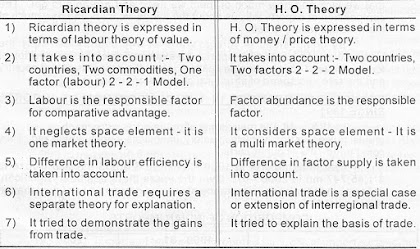 In the classical analysis, difference in the cost ratios between countries are due to the difference in the skill and efficiency of labour. It implies that there will be no trade in future if the two countries have mastered each other's technique and labour becomes equally efficient in both.

But Ohlin's theory asserts that trade will never end even if knowledge travels freely between the countries and the best techniques of production are always known to both countries. This is because, the modern theory states that the relative differences in factor endowments are the relative causes for the differences in the prices of commodities.

Thus the modern theory is an improvement over the classical theory.