As a central bank, the Reserve Bank has significant powers and duties to perform. For smooth and speedy progress of the Indian Financial System, it has to perform some important tasks. Among others it includes maintaining monetary and financial stability, to develop and maintain stable payment system, to promote and develop financial infrastructure and to regulate or control the financial institutions. 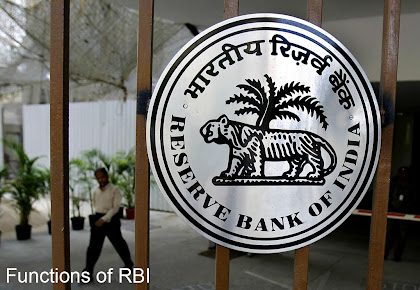 For simplification, the functions of the Reserve Bank are classified into the traditional functions, the development functions and supervisory functions.

Traditional functions are those functions which every central bank of each nation performs all over the world. Basically these functions are in line with the objectives with which the bank is set up. It includes fundamental functions of the Central Bank. They comprise the following tasks.

Along with the routine traditional functions, central banks especially in the developing country like India have to perform numerous functions. These functions are country specific functions and can change according to the requirements of that country. The RBI has been performing as a promoter of the financial system since its inception. Some of the major development functions of the RBI are maintained below.

The Reserve Bank of India has a credit policy which aims at pursuing higher growth with price stability. Higher economic growth means to produce more quantity of goods and services in different sectors of an economy; Price stability however does not mean no change in the general price level but to control the inflation. The credit policy aims at increasing finance for the agriculture and industrial activities. When credit policy is implemented, the role of other commercial banks is very important. Commercial banks flow of credit to different sectors of the economy depends on the actual cost of credit and arability of funds in the economy.

To read latest functions of RBI, please download official free e-book published by RBI. This free e-book is a pdf document compressed in a Rar file (8.92 MB). To extract and read this PDF document, you'll need 'Winrar' and 'Adobe Acrobat Reader' softwares (both are free) installed on your computer.

Visit the official website of Reserve Bank of India for additional information.