What is a Cheque ? Definition - Kinds and Types of Cheques

What is a Cheque ? Meaning ↓

Cheque is an important negotiable instrument which can be transferred by mere hand delivery. Cheque is used to make safe and convenient payment. It is less risky and the danger of loss is minimised. 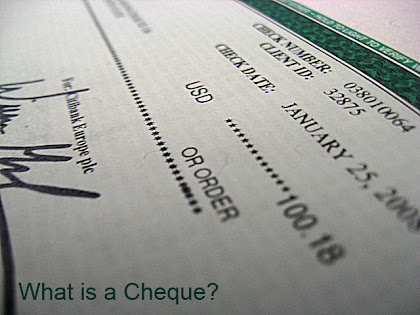 Definition of a Cheque ↓

"Cheque is an instrument in writing containing an unconditional order, addressed to a banker, sign by the person who has deposited money with the banker, requiring him to pay on demand a certain sum of money only to or to the order of certain person or to the bearer of instrument."

When a cheque is not crossed, it is known as an "Open Cheque" or an "Uncrossed Cheque". The payment of such a cheque can be obtained at the counter of the bank. An open cheque may be a bearer cheque or an order one.

Crossing of cheque means drawing two parallel lines on the face of the cheque with or without additional words like "& CO." or "Account Payee" or "Not Negotiable". A crossed cheque cannot be encashed at the cash counter of a bank but it can only be credited to the payee's account.

If a cheque bears a date earlier than the date on which it is presented to the bank, it is called as "anti-dated cheque". Such a cheque is valid upto three months from the date of the cheque.

If a cheque bears a date which is yet to come (future date) then it is known as post-dated cheque. A post dated cheque cannot be honoured earlier than the date on the cheque.

If a cheque is presented for payment after three months from the date of the cheque it is called stale cheque. A stale cheque is not honoured by the bank.