Demand In Economics - Law Of Demand - Elasticity of Demand

In economic terminology the term demand conveys a wider and definite meaning than in the ordinary usage. Ordinarily demand means a desire, whereas in economic sense it is something more than a mere desire. It is interpreted as a want backed up by the - purchasing power. Further demand is per unit of time such as per day, per week etc. moreover it is meaningless to mention demand without reference to price. Considering all these aspects the term demand can be defined in the following words,

“Demand for anything means the quantity of that commodity, which is bought, at a given price, per unit of time.”

This law explains the functional relationship between price of a commodity and the quantity demanded of the same. It is observed that the price and the demand are inversely related which means that the two move in the opposite direction. An increase in the price leads to a fall in the demand and vice versa. This relationship can be stated as

“Other things being equal, the demand for a commodity varies inversely as the price”

It can be observed that with a fall in price every individual consumer buys a larger quantity than before as a result of which the total market demand also rises. In case of an increase in price the situation will be reserved. Thus the demand schedule reveals the inverse price-demand relationship, i.e. the Law of Demand. 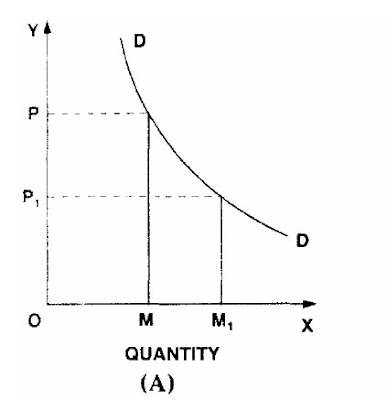 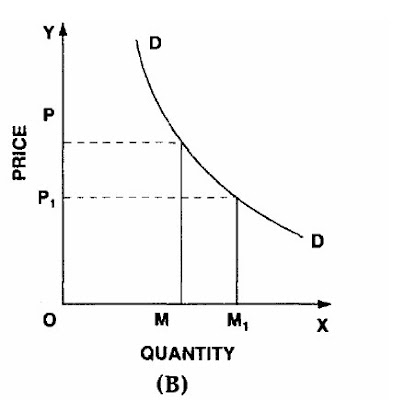 Assumptions of the 'Law of Demand'

The law of demand in order to establish the price-demand relationship makes a number of assumptions as follows:

These Assumptions are expressed in the phrase “other things remaining equal”.

Exceptions of the 'Law of Demand'

In case of major bulk of the commodities the validity of the law is experienced. However there are certain situations and commodities which do not follow the law. These are termed as the exceptions to the law; these can be expressed as follows:

The law of demand, while explaining the price-demand relationship assumes other factors to be constant. In reality however, these factors such as income, population, tastes, habits, preferences etc., do not remain constant and keep on affecting the demand. As a result the demand changes i.e. rises or falls, without any change in price.

The law of demand explains the effect of only-one factor viz., price, on the demand for a commodity, under the assumption of constancy of other determinants. In practice, other factors such as, income, population etc. cause the rise or fall in demand without any change in the price. These effects are different from the law of demand. They are termed as changes in demand in contrast to variations in demand which occur due to changes in the price of a commodity. In economic theory a distinction is made between (a) Variations i.e. extension and contraction in demand due to price and (b) Changes i.e. increase and decrease in demand due to other factors.

(a) Variations in demand refer to those which occur due to changes in the price of a commodity.

These are two types.

(b) Changes in demand imply the rise and fall due to factors other than price.

It means they occur without any change in price. They are of two types. 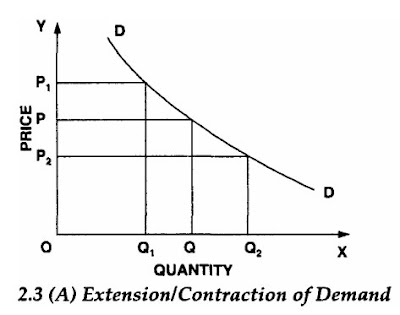 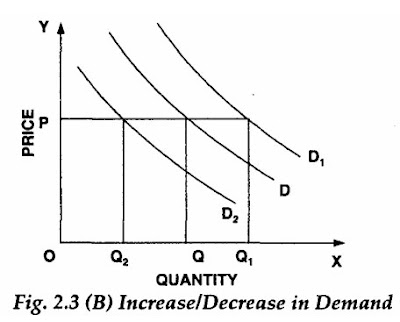 Fig (A) Extension/Contraction of Demand

Fig (B) Increase/Decrease in Demand

The law of demand explains the functional relationship between price and demand. In fact, the demand for a commodity depends not only on the price of a commodity but also on other factors such as income, population, tastes and preferences of the consumer. The law of demand assumes these factors to be constant and states the inverse price-demand relationship. Barring certain exceptions, the inverse price- demand relationship holds good in case of the goods that are bought and sold in the market.

According to Marshall, “the elasticity (or responsiveness) of demand in a market is great or small accordingly as the demand changes (rises or falls) much or little for a given change (rise or fall) in price.”

The concept of elasticity can be expressed in the form of an equation as:

The concept of price elasticity reveals that the degree of responsiveness of demand to the change in price differs from commodity to commodity. Demand for some commodities is more elastic while that for certain others is less elastic. Using the formula of elasticity, it possible to mention following different types of price elasticity: 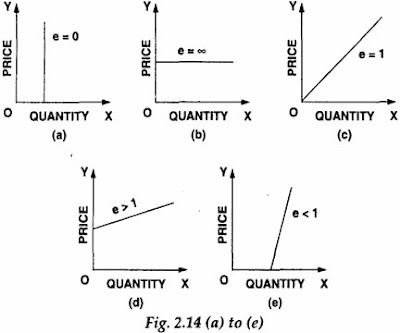 From the above analysis it can be concluded that theoretically five different types of price elasticity can be mentioned. In practice, however two extreme cases i.e. perfectly elastic and perfectly inelastic demand, are rarely experienced. What we really have is more elastic (e > 1) or less elastic (e < 1 ) demand. The unitary elasticity is a dividing line between these two cases.

From the above analysis of the determinants of elasticity of demand, it is clear that no precise conclusion about the nature of demand for any specific commodity can be drawn. It depends upon the range of price, and the psychology of the consumers. The conclusion regarding the nature of demand should, therefore be restricted to small changes in prices during short period. By doing so, the influence of changes in habits, tastes, likes customs etc., can be ignored.

The following types of income elasticity can be observed:

The relationship between any two goods is of two types. The goods X and Y can be complementary goods (such as pen and ink) or substitutes (such as pen and ball pen). In case of complementary commodities, the cross elasticity will be negative. This means that fall in price of X (pen) leads to rise in its demand so also rise in t) demand for Y (ink) On the other hand, the cross elasticity for substitutes is positive which means a fall in price of X (pen) results in rise in demand for X and fall in demand for Y (ball pen). If two commodities, say X and Y, are unrelated there will be no change i. Demand for X as a result of change in price of Y. Cross elasticity in cad of such unrelated goods will then be zero.

In short, cross elasticity will be of three types:

The concept of elasticity is of great importance both in economic theory and in practice.

In nutshell, it can be concluded that the concept of elasticity of demand has great significance in economic analysis. Its usefulness in branches of economic such as production, distribution, public finance, international trade etc., has been widely accepted.