It is quite surprising that not only humans but even pet animals like Cats too face obesity problems. I can’t say whether it is due to genetic defects, breeding or lack of hunting activities. Whatever may be the reason, former so called Cute Kitty is now exploding and turning fatter day by day. 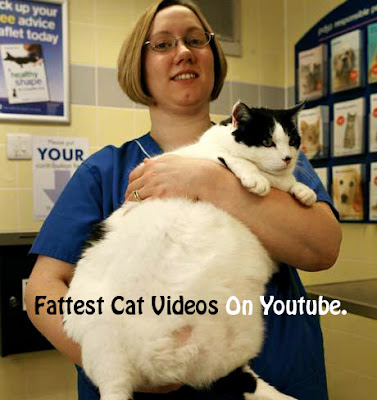 Here are some cool Youtube Videos of Cute, Fat and Popular Cats. Scroll below and play videos you find interesting. These Funny Fat Cats are worth watching.

According to Guinness Book of World Records Himmy is officially the fattest Cat in the world. This fat kitty weights approximately 46.8 pounds (21.3kg) and lived in Cairns, Queensland. Himmy, a desexed tabby died at the age of 10 due to respiratory failure. “Amazing Kitty.”

Note: The Guinness Book of World Records is no longer maintaining a column for world's heaviest animals because of concerns about animals dangerously overfed.

Mitzi, a Giant Kitty from Eugene, is Oregon's biggest kitty. Mitzi is 48 inch long when measured from nose to tail. Mitzi belongs to Margaret Marusarz. She adopted Mitzi just over a year ago when her first owner fell ill and her friend was trying to find a home for this over-sized kitty thats when Margaret first saw Mitzi. Mitzi weights a whooping 46 pounds which is only a half pound less from all time world record of Fattest Cat. A normal cat weighs about 10 pounds wereas Mitzi here weighs over three times more than a regular cat. Mitzi is relatively rare Maine Coon breed of house cat, bit moody but still lovable. Sadly, Mitzi's tail is short than her body size (possibly due some accident and tail never grew back to its ful length) and therefore shortly miss the title of longest cat in the world.

The title of world's longest Cat is claimed by cat named Verismo Leonetti Reserve Red a.k.a Leo from Chicago. Leo aslike Mitzi too is a Maine Coon breed of house cat, it measures 48 inch long and is as tall as an 8 years old child and his paw can fit into a 2 year old's shoe. Leo's Vet says, Leo is a healthy 35 pound cat perfect for its frame. Leo is so tall he can put his paw on kitchen counter therefore his owners take immense care while cooking.

Kailee is from lino lake, Minnesota. This Cat is named after Viking football player Kailee Wong. This Fat Brown Kitty weights around 40.8 pounds (i.e 18.50 Kgs) and had once establised its name in prestigious Guinness Book of World Records. Kailee gets medical checkups after every six months. Overcoming all kitty obesity this Cat is in very good health. “Former Fattest Cat In The World.”

Mikesch was 18 Kilos (39.7 Pounds) black and white colored German House Cat from Berlin, Germany. Mikesch was take away from custody of his owner by Berlin Animal Shelter under charges of negligence. His owner use to overfeed him 4 pounds of minced meat on daily basis. This resulted in obesity of Mikesch. Latest news says that now Mikesch is missing his owner so much that he went on hunger strike.

5. World's Most Thickest Cat Is From China.

This cute white male owned by Xu Jirong is probably world's most thickest known cat. It has a huge waist size of 83cm, weights around 15-16kg and eats 3kg of chicken a day. Despite obesity this Cat is in very good health. It is a local celebrity and lives in Qingdao, China.

It is the same cat you watched earlier. Surprisingly it not only world's thickest cat but also China's fattest cat. Xu Jirong's cat eats fish, steam bread, noodles, rice, etc but any of these must be served with meat. “Lucky Fat Cat!”.

6. Orazio Is Fattest Cat Of Italy.

Orazio is the fattest Cat of Italy. He weighs 16 Kgs (35.3 Pounds). This italian cat looks very much similar to a living Garfield. Orazio lives with his owner Laura Santarelli and few dogs in a farm. Orazio is one of the few cats who're not at all afraid of dogs. Laura says, Orazio guards her farm like a dog. This cat is very friendly towards other people. Currently Orazio is in full good health.

A huge stray male Cat was found in Oregon. Vets who examined this Cat named it “Arnold”.

This is another video of 44 pound Stray Cat found in South New Jersey.

This Cat is possibly the fattest Cat from Japan, check YouTube

. This Japanese Fat Cat weighs about 12.06 Kgs and has a waist size of 75.5 cm. This Japanese Cat is so Fat that it can’t even scratch its own face when it itches badly, definitely needs owner's help for scratching. This cat have no intention to loose its exploding weight and thats why hates treadmill workout. This Japanese Cat just want to relax, relax and keep relaxing forever. Oops! This contradicts workaholic nature of hard working Japanese people.

Simba M. Mufasa is a Fat Florida Bobcat / Tabby a.k.a Triple Wide. More details of this BobCat are not known.

This is a pictorial video slideshow of some of the World's best known Fattest Pet Cats. Now famous on the Internet / Youtube.

When a morbid fat cat decides to loose weight and take action in her own hand. Fake yet Funny, Ha! Ha!.

Thanks to all Fat Cat lovers plus readers for reading and enjoying this funny cat article. Hope you enjoyed above funny cat videos. Rds, Gaurav Akrani :).