Sevres, France based International Bureau of Weights and Measures, serves as a depository for the primary international standards and as a laboratory for certification and intercomparison of national standard copies. In 1960, the SI system was built upon the MKS system, that is, metre-kilogram-second system, which has seven basic units. These are as follows :- 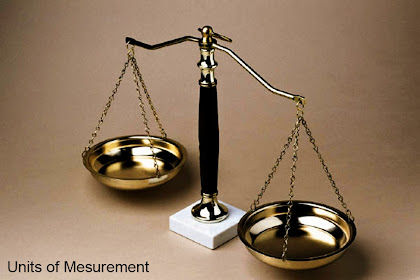 Kilogram (unit of weight; Symbol kg) which equals 1,000 grams as defined by the international prototype kilogram of platinum-iridium in the keeping of the International Bureau of Weights and Measures;

Second (unit of time; Symbol s), the duration of 9,192,631,770 periods of radiation associated with a specified transition of the cesium-133 atom;

Ampere (unit of electric current; Symbol A), which is the current that, if maintained in two wires placed one metre apart in a vacuum, would -produce a force of 2 x 10-7 Newton per metre of length;

Candela (unit of luminous intensity; Symbol cd), defined as the intensity in a given direction of a source emitting radiation of frequency 540 x 1012 hertz and that has a radiant intensity in that direction of 1/683 watt per steradian;

Mole (unit of amount of substance; Symbol mol), defined as containing as many elementary entities of a substance as there arc atoms in 0.012 kilogram of carbon-12

Kelvin (unit of temperature; Symbol K) which is 1/273.16 of the thermodynamic temperature of the triple point (equilibrium among the solid, liquid, and gaseous phases) of pure water.

Angstrom : Unit of wavelength of light is Angstrom. 1 Angstrom = 10-8 cm. There is a bigger unit for measuring the wavelength of infra-red light; it is called a milli-micron and is equal to 10-7 cm. Micron = 10-4 cm, is a still bigger unit.

Bar : Unit of atmospheric pressure; one bar is equal to a pressure of 106 dynes per sq cm.

Calorie : Unit of heat. It is the amount of heat required to raise the temperature of one gram of water through 1°C.

joule: Unit of work or energy. It is equal to 10-7 ergs. It is the energy consumed in one second in an electrical circuit through which a current energy of one ampere is flowing against a potential difference of one volt.

Knot : Measure to know the speed of a ship.

Nautical Mile : A unit of distance used in navigation. One minute of longitude measured along the Equator. A Nautical Mile is approximately equal to 6,080 feet.