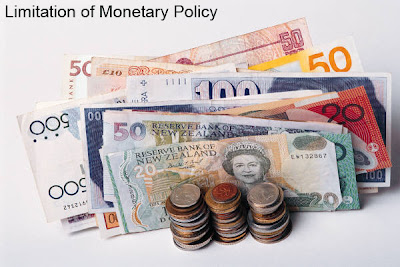 1. There exist a Non-Monetized Sector

In many developing countries, there is an existence of non-monetized economy in large extent. People live in rural areas where many of the transactions are of the barter type and not monetary type. Similarly, due to non-monetized sector the progress of commercial banks is not up to the mark. This creates a major bottleneck in the implementation of the monetary policy.

As the economy launch itself into a higher orbit of economic growth and development, the financial sector comes up with great speed. As a result many Non-Banking Financial Institutions (NBFIs) come up. These NBFIs also provide credit in the economy. However, the NBFIs do not come under the purview of a monetary policy and thus nullify the effect of a monetary policy.

In rapidly growing economy the deposit base of many commercial banks is expanded. This creates excess liquidity in the system. Under this circumstances even if the monetary policy increases the CRR or SLR, it dose not deter commercial banks from credit creation. So the existence of excess liquidity due to high deposit base is a hindrance in the way of successful monetary policy.

5. Money Not Appearing in an Economy

Large percentage of money never come in the mainstream economy. Rich people, traders, businessmen and other people prefer to spend rather than to deposit money in the bank. This shadow money is used for buying precious metals like gold, silver, ornaments, land and in speculation. This type of lavish spending give rise to inflationary trend in mainstream economy and the monetary policy fails to control it.

In order to attain a maximum of the above objectives it is unnecessary that both the fiscal and monetary policies should go hand in hand. As both these policies are prepared and implemented by two different authorities, there is a possibility of non-coordination between these two policies. This can harm the interest of the overall economic policy.

These are major obstacles in implementation of monetary policy. If these factors are controlled or kept within limit, then the monetary policy can give expected results. Thus though the monetary policy suffers from these limitations, still it has an immense significance in influencing the process of economic growth and development.