Religion of Buddhism and Teachings of Gautama Buddha

Buddhism catered to religious striving of the time. It was a midway between Hinduism and Jainism. Buddhism presented the ascetic traditions to Indian society. It had more followers abroad than in India. Buddhism was one imprint that India left on other civilisations.

Gautama Buddha (The Founder of Buddhism) 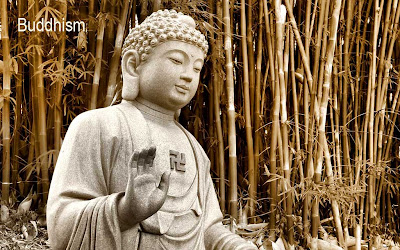 Gautama Buddha was the founder of Buddhism. He belonged to the Kshatriya clan of Sakya. He was born in 567 BC at Lumbini near Kapilavastu, near Nepal. His father Suddhodana was the ruler of Kapilavastu. Like Mahavira, he was inclined from his childhood, towards spiritual pursuits.

All the royal luxuries in which Gautama lived had no effect on him. He was married at a young age to a princess called Yashodhara and had a son named Rahul.

Once Gautama's charioteer was driving him through the town. The appearance of an old man bent with age moved Gautama. Again the sight of a sick man, groaning with pain, was pathetic. The dead body of a man being carried made Gautama think about man's destiny. He was consoled when he saw an ascetic in search of salvation. These sights are known to be the 'Four Great Sights'. He left home, his wife and the child in order to find a solution. This event is known as 'The Great Renunciation'.

After leaving home in search of Truth, Gautarna wandered from place to place. For some time he studied under renowned teachers of Rajgriha and then went to Gaya. He practised severe penance and led a life of extreme austerity. Finally, at the age of thirty-five Gautama attained enlightenment at Bodh Gaya in Bihar. This event occurred in 537 BC when he became the Buddha or the Enlightened One.

At the place where Buddha got enlightenment, a temple known as Mahabodhi Temple was constructed later. The peepal tree is now referred to as the Mahabodhi Tree. Buddha was also called the Tathghat, the founder of Truth. After the enlightenment, he embarked on preaching his religion. He delivered his first sermon at the Deer Park in Sarnath near Varanasi in the presence of five ascetics. This event in the history of Buddhism is known as Dharmachakra Parvartan or the turning of the wheel of sacred law. Buddha's fame spread far and wide. For another forty years he travelled all over the country spreading his message. He established a Bodh Sangha (Buddhist order) at Magadha. He had a large number of followers including the rulers of Magadha, Kosala and Kosambi.

Buddha followed a simple path and inspired people to lead a simple life. His message to people was that the world is full of sufferings and a man could attain salvation by following his teachings contained in the eight fold path and four Noble Truths.

The essence of Buddhism lies in Four Noble Truths. They are:

The way to nirvana, in Buddhism, or the path that leads to removal of suffering, is known as the eight fold path (asthangika marg) or the middle path.

It is a path midway between luxurious living and hard penance.

Buddha held that the whole universe was controlled by Dharma, a universal law. He was silent about the existence of God, though he never formally denied it. Like Mahavira he emphasised non-violence.

Buddha formulated a code of conduct for his followers. This is included the following:

Karma : Like Hinduism, Buddhism believed in the theory of Karma. Buddhism says that man is the maker of his destiny and believed in rebirth. The evil deeds will be punished. Therefore, man should follow a middle path. It is karma which decides the type of existence in the next life. It is called the wheel of Existence.

Stress on Morality : Buddha insisted on a life based on good actions. His followers were enjoined to practise nonviolence and to lead a upright life.

Nirvana : The ultimate goal of life is to attain Nirvana or salvation, the eternal peace and bliss. It is a peaceful state of mind, which conquers all diseases, makes the person free from the chain of births and deaths.

Universal Brotherhood : Lord Buddha preached universal brotherhood of mankind. He wanted people to live in peace setting aside all their feuds. He invited people of all classes and races to join Buddhism.

No Faith in Rituals and Sacrifices : Buddha said that yajnas cannot change a man's destiny. Sacrifices and rituals are empty rhetorics.

Ahimsa : Like Mahavira, Buddha attached importance to sanctity of life.

Organisation for teaching of Buddhism