What is Capital? Meaning, Features and Types of Capital

What is Capital? Meaning

In book-keeping, capital means amount invested by businessman in the business.

In commerce subjects like O.C and S.P, capital means finance or company's capital.

But, in economics, capital is that part of wealth which is used for production.

But here consider meaning of term capital from economic point of view.

The word Capital is related with the following three terms, viz.,

The relation of capital with wealth, money and income is explained below:-

Capital is that part of wealth which is used for production. So, wealth is a broad concept and capital is a narrowed concept.

Relation of Capital and Wealth is explained with the help of following picture.

If a commodity is having features like scarcity, utility, externality and transferability, it becomes wealth. A motor car has all above features, so it is a wealth. (As per picture 'A' in above photo). When wealth is used in production process, it becomes capital. If that car is used for taxi (cab) business, it becomes capital. (As per picture 'B' in above photo). Therefore, any commodity as a wealth becomes the capital if it is used for production.

Thus, all capital is wealth but all wealth is not capital.

The relation between Capital and Money is shown in the following picture.

Capital generates income. So, capital is a source and income is a result. E.g. refrigerator is a capital for a ice-cream parlour owner. But, profits which he gets out of his business is his income.

So, Capital is a FUND concept and Income is a FLOW concept. 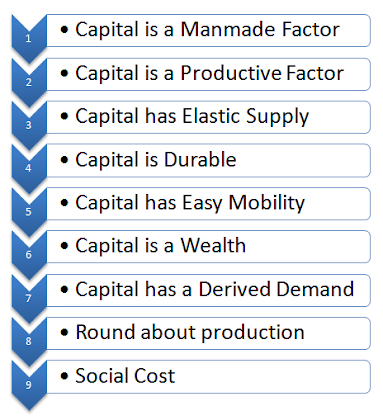 The characteristics or features of capital are:- 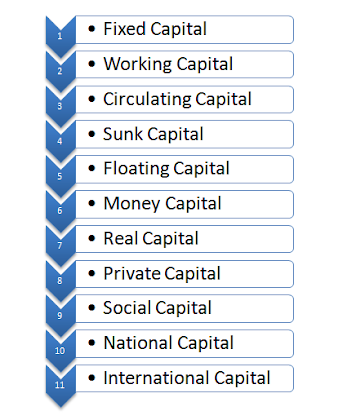 The forms, classification or types of capital are:-