The effect of public expenditure on production can be examined with reference to its effects on ability & willingness to work, save & invest and on diversion of resources. 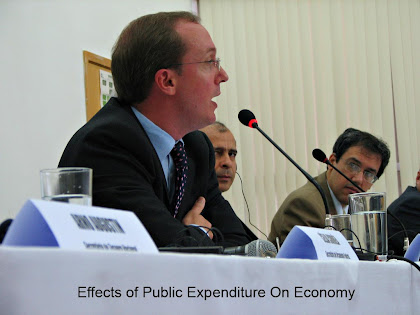 The primary aim of the government is to maximise social benefit through public expenditure. The objective of maximum social welfare can be achieved only when the inequality of income is removed or minimised. Government expenditure is very useful to fulfill this goal. Government collects excess income of the rich through income tax and sales tax on luxuries. The funds thus mobilised are directed towards welfare programmes to promote the standard of poor and weaker section. Thus public expenditure helps to achieve the objective of equal distribution of income.

Expenditure on social security & subsidies to poor are aimed at increasing their real income & purchasing power. Public expenditure on education, communication, health has a positive impact on productivity of the weaker section of society, thereby increasing their income earning capacity.

The goals of planning are effectively realised only through government expenditure. The government allocates funds for the growth of various sectors like agriculture, industry, transport, communications, education, energy, health, exports, imports, with a view to achieve impressive growth.

Modern economies have all experienced tremendous growth in public expenditure. So it is absolutely necessary for governments to formulate rational public expenditure policies in order to achieve the desired effects on income, distribution, employment and growth.