The Human Relations Movement began with the Hawthorne Experiments. They were conducted at Western Electrical Works in USA, b/w 1924-1932. 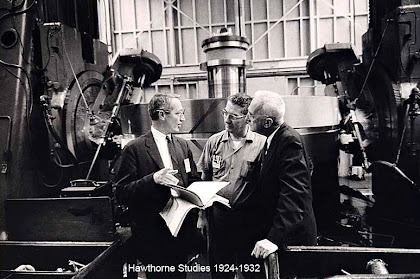 Under these test two small groups of six female telephone relay assemblers were selected. Each group was kept in separate rooms. From time to time, changes were made in working hours, rest periods, lunch breaks, etc. They were allowed to choose their own rest periods and to give suggestions. Output increased in both the control rooms. It was concluded that social relationship among workers, participation in decision-making, etc. had a greater effect on productivity than working conditions.

21,000 employees were interviewed over a period of three years to find out reasons for increased productivity. It was concluded that productivity can be increased if workers are allowed to talk freely about matters that are important to them.

A group of 14 male workers in the bank wiring room were placed under observation for six months. A worker's pay depended on the performance of the group as a whole. The researchers thought that the efficient workers would put pressure on the less efficient workers to complete the work. However, it was found that the group established its own standards of output, and social pressure was used to achieve the standards of output.

The conclusions derived from the Hawthorne Studies were as follows :-

The Hawthorne Experiments are mainly criticised on the following grounds :-