"Control means to guide something in the direction it is intended to go."

According to James Stoner,

"Controlling is the process of ensuring that actual activities conform to the planned activities."

Five main steps in the control process with diagram are discussed below :- 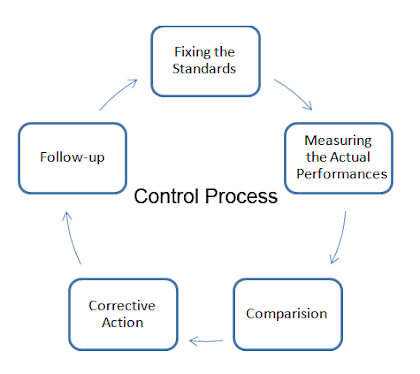 The standards should be as clear as possible. It should be easily understood by both superiors and subordinates. The responsibility of each individual should also be clearly defined i.e. everyone should be responsible for achieving a particular goal, objective, target, etc. For e.g. The marketing department fixes a standard - "We will sell 2,000 units of product X in one month". So here the standard is 2,000 units.

After establishing the standards, the subordinates should be provided with all the resources for performing the job. They should be properly directed and motivated to perform the job. Similarly, they should be properly supervised. If the subordinated come under Theory X they require maximum supervision. However, if they come, under Theory Y then they require minimum supervision. After they complete the job their performance should be carefully measured. There are many traditional and modern techniques for measuring the performances of subordinates.

Positive Deviation means that the actual performances are better than the established standards. Positive deviations should be appreciated.

Negative Deviation means that the actual performance is less than the established standards. The management should pay special attention to the negative deviation. They should find out the causes of negative deviations.

Generally, minor (small) deviations are ignored. However, major deviations should be immediately addressed and reported to the top management. PERT, Budgetary Control, Observation, Inspection, Reports, etc. are some of the methods used for comparison.