What are Features of Credit Card?

What are Features of Credit Card?

The eleven important features of credit card are depicted in the image below. 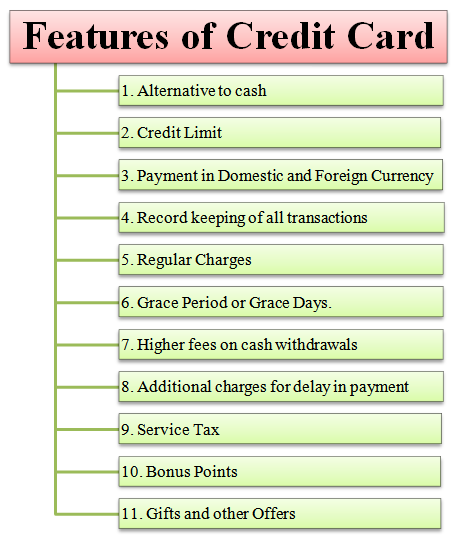 The main characteristics or features of credit card are listed as follows:

Now let's discuss each feature of credit card one by one.

Credit card is a better alternative to cash. It removes the worry of carrying various currency denominations to pay at the trade counters. It is quite easy and way fast to use a credit card rather than waiting for completion of cash transactions.

As an alternative, credit card helps a cardholder to travel anywhere in the world without a need to carry an ample amount of cash. It also reduces the possible risk of money theft and gives its user a complete peace of mind.

The credit cardholder enjoys the facility of a credit limit set on his card. This limit of credit is determined by the credit card issuing entity (bank or NBFC) only after analyzing the credit worthiness of the cardholder.

The credit limit is of two types, viz.,

Normal credit limit is usual credit given by the bank or NBFC at the time of issuing a credit card.

Revolving credit limit varies with the financial exposure of the credit cardholder.

Credit card reduces the cumbersome process of currency conversion. That is, it removes the financial complexities often encountered in converting a domestic currency into a foreign currency. It is because of this feature, a credit cardholder can possibly make payments to merchants present in any corner of the world.

4. Record keeping of all transactions

Credit card issuing entities like banks or NBFCs keeps a complete record of all transactions made by their credit cardholders. Such a record helps these entities to raise appropriate billing amounts payable by their cardholders, either on a monthly or some periodic basis.

The regular charges are primarily classified into two types, viz.,

Annual charges are collected on per annum or yearly basis.

Additional charges are collected for other supplementary services provided by the credit card issuing entity. Such services include, add-on-card (an additional credit card), issue of a new credit card, etc.

The grace period is referred to those minimum numbers of additional days within which a credit cardholder has to pay his credit card bill without any incurring interest or financial charges.

8. Additional charges for delay in payment

The credit card payment is supposed to be made within a due date as mentioned on the bill of a credit card. If payment is not paid on time, then a credit-card issuer charges some additional costs, which are resulted due to delay in payment. These charges are charged to compensate (recover) the interest cost, administration cost and any other related costs bared by the credit card issuing entity.

The competition among the credit card providers is unbending (adamant). Offering various incentives is usually a trendy (fashionable) way to improve the sale of the products in the ordinary course of business. Following this trend, credit card providers also give bonus points on the financial value of the transactions compiled by their customers.

11. Gifts and other offers

At a later stage (i.e. after crossing pre-determined number of bonus points) accumulated bonus points are redeemed either by converting them into gifts, cash back offers, or any other similar compelling offers. To collect many bonus points, the credit cardholder has to carry out a considerable number of transactions through his credit card.

Based on discussion made above, we can conclude that,

Credit card is the outcome of comprehensive banking functions.