Stages in Evolution of Business from Local to Global

Stages in the evolution of business

Evolution of business means its origin, growth, and continuous development with expansion in various sectors, that contribute and run economies.

The business evolution went through many progressive stages or so called developmental steps. In each stage of progress, it evolved itself and got more mature than its previous state. It is evident that, at every step of evolution; it expanded its scale of operations and also widened its modes of communication. It is continuously evolving since then.

The five main stages in the evolution of a business are depicted below. 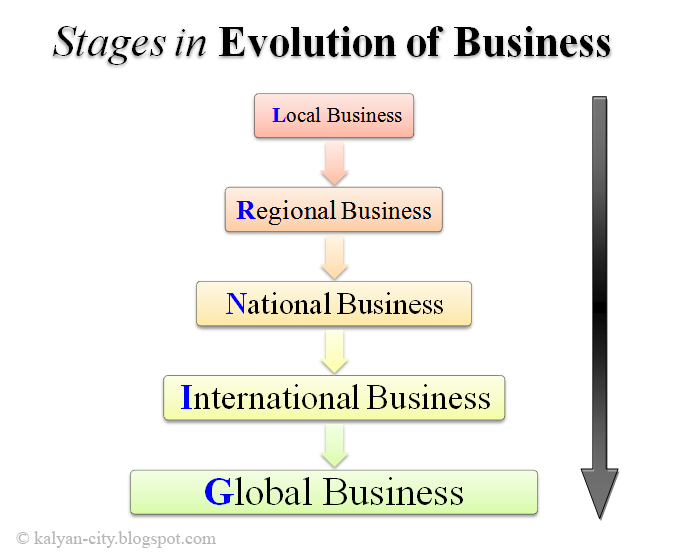 The business evolution went from local stage to a global one:

Now let's discuss in brief each of the above-mentioned main stages that contributed towards the evolution of business.

Local business is the starting stage of the evolution of business.

Business had its origin since the early ages of human civilization. It began with a mere sharing of food commodities. People use to collect and store whatever surplus they had and use to seek out something they didn't have. This situation was present in various areas around the world which later gave birth to a form of business in local areas.

In general, local business can be stated as various exchanges (trade) activities happening regularly among people of a local-area.

The three sub-stages of evolution of local business: 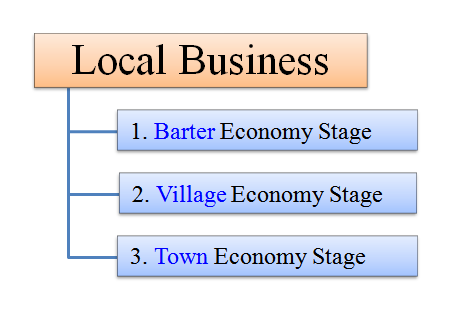 Regional business is the second stage of evolution of business.

In the context of this article, region is a huge landmass or an area that comprises of numerous town economies.

When a business alliance of a town's economy from any specific region feels the need to extend the scope of their business, it results in business expansion at a regional level.

The meaning of regional business:

National business is the third stage of evolution of business.

Nation is an organized political union of its member states.

The meaning of national business:

International business is the fourth stage of the evolution of business.

No nation is 100% self-sufficient with its all available resources. A nation may have an abundance of some resources but may also experience scarcity of other resources. To overcome this scarcity, nations often trade among themselves. They satisfy each other's needs by supplying their surpluses and/or expertise, and in return bring home, the scanty resources.

The meaning of international business:

Today, international business has increased many folds. It is so, mostly due to the availability of faster modes of communication and transport, regional cooperation between countries, and adaptation of free trade policies.

Global business, is the current stage of evolution of business.

Global market is one big world level market. Here, the entire globe or world is considered as one huge market of opportunities. This market has the enormous levels of customer base than any other type of market. It has no borders and is almost restrictions free. All companies can sell their goods and services in this kind of one open global market. However, here, the competition is very severe. Large funds, skilled human resource, an ample amount of creativity and innovation, best quality of products and services, along with world-class logistics and marketing are required to sustain the tremendous pressures of its severity. Generally, this market is fully controlled by the rich cartels of multinational companies (MNCs).

The meaning of global business:

This is how business evolution took place, starting from its basic local level and arriving at a matured global stage.