What is Advertising? Etymology, Definition and Meaning

Etymology means a study of origin, evolution and history of words.

‘Advertise’ is a verb form of English word ‘Advertising’. It has its origin in a classical Latin word ‘Advertere’. 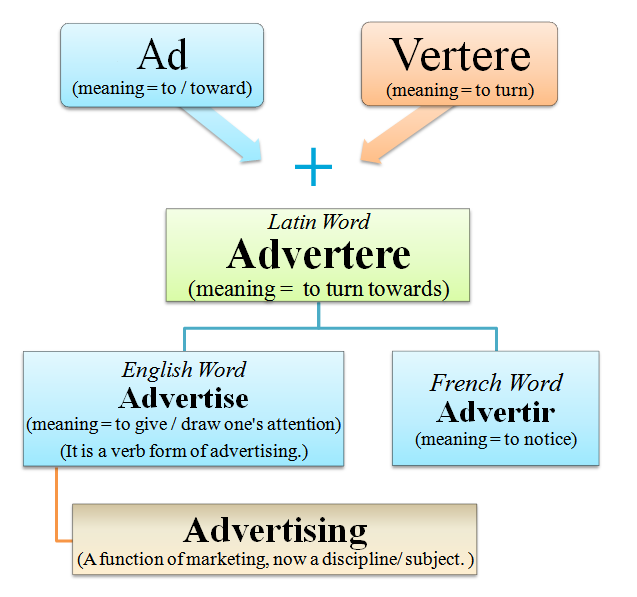 Thus, ‘Advertere’, a union of ‘Ad’ and ‘Vertere’, jointly means “to turn (one's attention) to or towards (something).”

In its original meaning ‘Advertise’ is “to give (or draw) one's attention to (or towards) something.”

1. According to Oxford Dictionary,

“Advertise means to present or describe a product, service or event in the media in order to increase sales.”

Advertising is defined in numerous ways with different perspectives. Following selected statements attempts to cover the simple, narrow and broad definition of advertising. Its comprehensive definition is also stated but within the preview of different senses viz; general, business and academic.

1. According to John E. Kennedy,

"Advertising is salesmanship in print."

2. According to American Marketing Association (AMA),

"Advertising means any paid form of non-personal presentation and promotion of ideas, goods, or services by an identified sponsor." 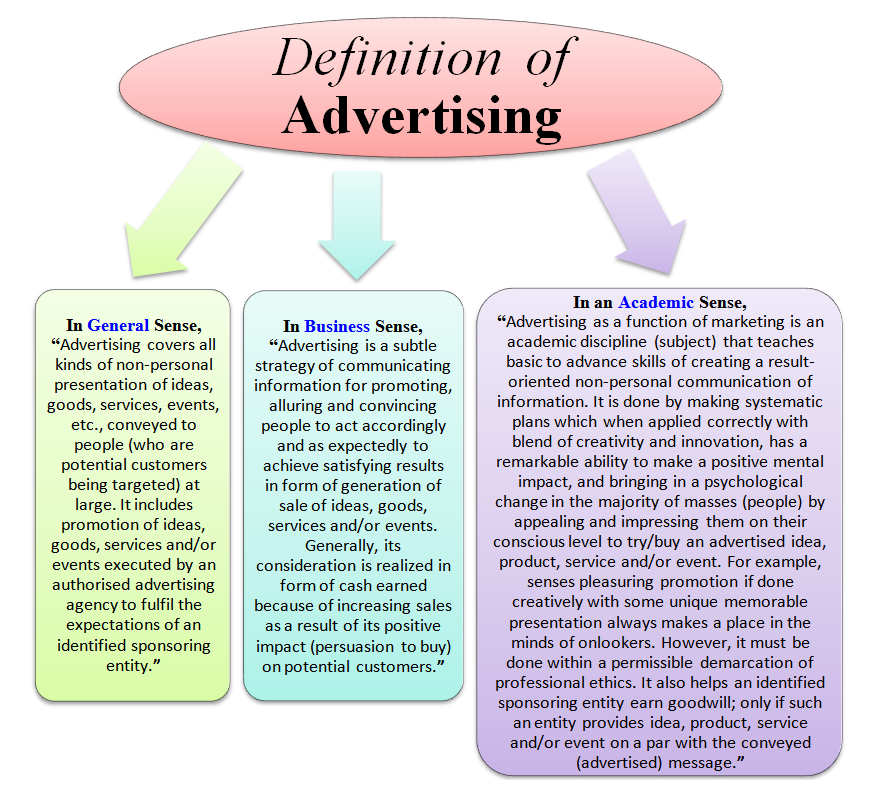 "Advertising is a subtle strategy of communicating information for promoting, alluring and convincing people to act accordingly and as expectedly to achieve satisfying results in form of generation of sale of ideas, goods, services and/or events. Generally, its consideration is realized in form of cash earned because of increasing sales as a result of its positive impact (persuasion) on potential customers."

5. In an Academic perspective,

"Advertising as a function of marketing is an academic discipline (subject) that teaches basic to advance skills of creating a result-oriented non-personal communication of information. It is done by making systematic plans which when applied correctly with blend of creativity and innovation, has a remarkable ability to make a positive mental impact, and bringing in a psychological change in the majority of masses (people) by appealing and impressing them on their conscious level to try/buy an advertised idea, product, service and/or event. For example, senses pleasuring promotion if done creatively with some unique memorable presentation always makes a place in the minds of onlookers. However, it must be done within a permissible demarcation of professional ethics. It also helps an identified sponsoring entity earn goodwill; only if such an entity provides idea, product, service and/or event on a par with the conveyed (advertised) message."

The following nine points explain the meaning of advertising.