What is Monopolistic Competition ? Its Meaning ↓

Monopolistic competition has been introduced by American economist Prof. Edward Chamberlin, in his book 'Theory of Monopolistic Competition' published in 1933. 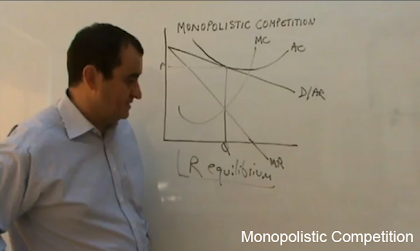 The following are the features or characteristics of monopolistic competition :-

There are large number of sellers producing differentiated products. So, competition among them is very keen. Since number of sellers is large, each seller produces a very small part of market supply. So no seller is in a position to control price of product. Every firm is limited in its size.

It is one of the most important features of monopolistic competition. In perfect competition, products are homogeneous in nature. On the contrary, here, every producer tries to keep his product dissimilar than his rival's product in order to maintain his separate identity. This boosts up the competition in market. So, every firm acquires some monopoly power.

3. Freedom of Entry and Exit

This feature leads to stiff competition in market. Free entry into the market enables new firms to come with close substitutes. Free entry or exit maintains normal profit in the market for a longer span of time.

It is a unique feature of monopolistic competition. In such type of market, due to product differentiation, every firm has to incur some additional expenditure in the form of selling cost. This cost includes sales promotion expenses, advertisement expenses, salaries of marketing staff, etc.

But on account of homogeneous product in perfect competition and zero competition in monopoly, selling cost does not exist there.

Large numbers of firms are different in their size. Each firm has its own production and marketing policy. So no firm is influenced by other firm. All are independent.