What is Monopoly ? Meaning and Concept

The term monopoly is derived from Greek words 'mono' which means single and 'poly' which means seller. So, monopoly is a market structure, where there only a single seller producing a product having no close substitute. 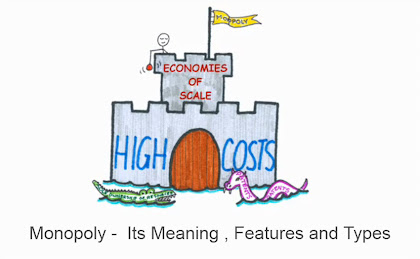 This single seller may be in the form of an individual owner or a single partnership or a Joint Stock Company. Such a single firm in market is called monopolist. Monopolist is price maker and has a control over the market supply of goods. But it does not mean that he can set both price and output level. A monopolist can do either of the two things i.e. price or output. It means he can fix either price or output but not both at a time.

Following are the features or characteristics of Monopoly :-

It is also called as absolute monopoly. In this case, there is only a single seller of product having no close substitute; not even remote one. There is absolutely zero level of competition. Such monopoly is practically very rare.

It is also called as relative monopoly or simple or limited monopoly. It refers to a single seller market having no close substitute. It means in this market, a product may have a remote substitute. So, there is fear of competition to some extent e.g. Mobile (Cellphone) telcom industry (e.g. vodaphone) is having competition from fixed landline phone service industry (e.g. BSNL).

When production is owned, controlled and managed by the individual, or private body or private organization, it is called private monopoly. e.g. Tata, Reliance, Bajaj, etc. groups in India. Such type of monopoly is profit oriented.

When production is owned, controlled and managed by government, it is called public monopoly. It is welfare and service oriented. So, it is also called as 'Welfare Monopoly' e.g. Railways, Defence, etc.

Simple monopoly firm charges a uniform price or single price to all the customers. He operates in a single market.

Such a monopoly firm charges different price to different customers for the same product. It prevails in more than one market.

When monopoly exists on account of trade marks, patents, copy rights, statutory regulation of government etc., it is called legal monopoly. Music industry is an example of legal monopoly.

It emerges as a result of natural advantages like good location, abundant mineral resources, etc. e.g. Gulf countries are having monopoly in crude oil exploration activities because of plenty of natural oil resources.

A number of business firms acquire monopoly position through amalgamation, cartels, syndicates, etc, it becomes joint monopoly. e.g. Actually, pizza making firm and burger making firm are competitors of each other in fast food industry. But when they combine their business, that leads to reduction in competition. So they can enjoy monopoly power in market.