Principles of Good Layout for an Advertisement Copy

The twelve features, qualities, or principles of good layout are as follows: 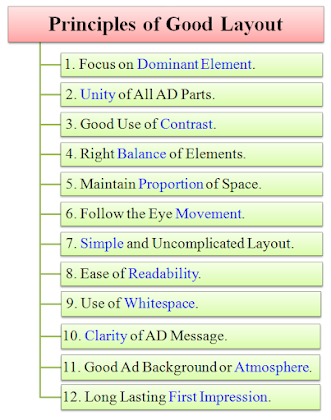 Now let's discuss each quality, feature or principle of a good layout.

2. Unity of all ad parts

The advertisement consists of many parts. All parts of the ad have a relation with each other. All these parts must have one objective. The objective must be to inform the consumer about the product and to persuade them to purchase the product. So, all parts of the ad must work together. They must not work against each other. There must be unity among all the parts of the ad. If unity is maintained, then the combined effect will also be good. We can have unity by keeping proper space between words and lines. We can also use the same style of printing.

3. Good use of contrast

The advertisement must have a right balance. Balance means the relationship between right-hand side and left-hand side of the ad.

There are two types of balance:

The advertisement must maintain proportion. The entire space must get divided among the different parts of the ad. The division must not be equal. If all the parts have same space, then the ad will not look good. More space must be provided to the dominant (important) part of the ad. Less space must be given to the less important parts.

The advertiser can control the eye movement by using the following points:

The layout must be simple. It must have very few elements in it. The lesser the elements, the stronger will be the impact (impression). Too many parts of the ad will make it useless. So the ad must have many empty spaces. It must not look very crowded and complicated.

The reader must be able to read the advertisement easily and quickly. The words in the ad must not be small sized. Avoid using capital letters for full paragraphs. Only significant words or sentences must be written in capital letters.

The advertisement must not appear stuffed and crowded. There must be enough white (blank) space to make it look uncluttered and pleasing. White space will attract the attention of the reader by making the ad look rich and classy.

The advertisement must be very clear about its objective. The reader must easily understand the ad message. He must not be confused to grasp the central message of the ad. He must also not have any doubts about the ad.

The atmosphere surrounding the advertisement must not be ignored or overlooked. The surrounding of an ad is also essential to make the ad appear attractive and pleasing. A shabby background or atmosphere makes even an attention-grabbing ad less appealing.

Therefore, the copywriter must make the first impression of the ad impactful. A positive impact can be achieved by using a catchy slogan, attractive colours, lots of white space, good illustration, so on.